(As an Amazon Associate, I earn from qualifying purchases. This website also participates in other affiliate programs and is compensated for referring traffic and business to these companies.)

You have noticed tiny creatures that move like white dots on the surface of the soil of your favorite plant. Someone told you it could be Soil Mites.

In the following lines, you will find out whether they are friends or possible destroyers of your plants and how to distinguish them from other organisms that inhabit the soil.

1. Soil Mites Are All Around Us

Soil Mites (Acari) are arthropods (arthros/jointed and podos/legs) that are found everywhere in nature and around us. They live on lakes, meadows, plants, trees, animals, and even on our hair follicles.

Most of the time you can not notice them with the naked eye, but they are big enough that you can see them with a magnifying glass.

They belong to the class arachnid (includes spiders and ticks). These little creatures are characterized by a segmented body with 8 legs and an exoskeleton (no internal bones).

Soil mites are 1-2 mm long. They are usually white or brown, but there are also yellow, red, black, orange, green, or pink variants.

Soil mites are very beneficial in nature and participate in the process of decomposition of organic matter (algae, leaves, animal residue, etc).

Some eat and thus remove harmful organisms, such as nematodes and bacteria. Some eat garden pests or dead insects.

And it is believed that there are another 60,000 species still undescribed. Certain types of soil attract certain types of mites. The type of soil mite cannot be identified with the naked eye, but only using a microscope.

The most common types of mites that can be found in soil:

3.They Are Very Useful Organisms for Plants and Soil 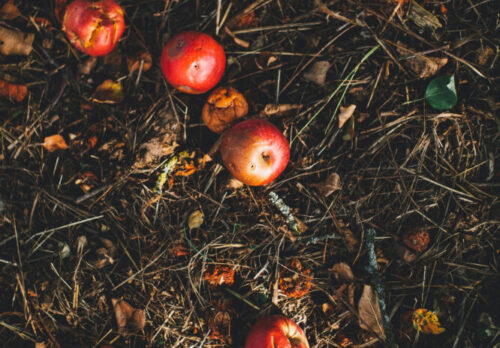 Soil Mites are attracted to moist compost so they can be found in potted plants outdoors and sometimes in houseplants as well. They come to a place where organic matter is rotting because it is food for them.

These are very beneficial beings who participate in the process of decomposition of organic matter. They eat harmful organisms and thus clean the soil of harmful products.

Mites that live in the soil in our pots can even be seen with the naked eye, especially when they are in large numbers.

They look like white dots moving on the surface of the soil. These arthropods live in the top layer of soil. You will only notice them when they come to the surface.

Soil mites can be brought into the house accidentally by contaminated compost from the outdoors.

4. Soil Mites Can Be Harmful to People

If you worked with soil and then did not wash your hands, so you sat down to eat, this is a possible way of getting mites with harmful substances into your body.

5. Do Not Always Remove Them!

Soil Mites that live in nature, in our yard should not be destroyed in any case.

They are very useful for the soil and by removing them we can only disrupt the natural decomposition process of organic matter and the quality of the soil and thus our plants.

Soil mites do absolutely no damage to plants. Their presence tells you that the soil is actually healthy.

But What If You Have To Remove Soil Mites

When it comes to houseplants, mites can bother you because of the aesthetics, especially if there are a large number of them, so they are scattered around the pot.

If we add to this the potential danger to humans due to the possible transmission of the disease then you can take certain steps.

It is best to transplant the plant and use soil of very good quality. Remove dried parts of plants because they are food for Soil Mites. Clean the pot thoroughly.

You can also use the old soil. Water the plant first because if the roots are dry, you can create a problem for the plant in terms of transplant shock by roughly moving it.

After a few hours, remove dead leaves, sticks, and anything that is mite food. Then wash the pot, tools, and plant roots.

It is recommended not to use pesticides as they can create more harm than good.

If you do opt for them though, the packaging should state that it is only for use for Soil Mites.

Keep in mind: when buying a new plant, examine the surface of the soil with a magnifying glass so as not to bring Soil Mites or some pests into your home accidentally.

Make your own soil spray mixtures

After a few days, check the soil using a magnifying glass. If necessary, use mixtures again.

6. Soil Mites Can Be Mistaken With Spider Mites 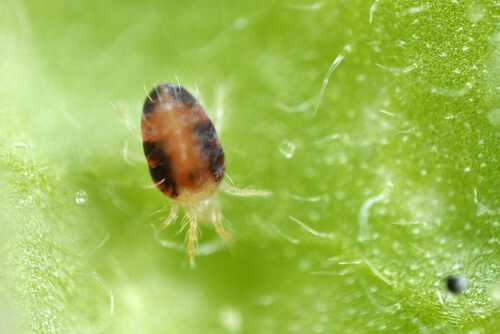 Both Soil Mites and Spider Mites are arthropods, part of the subclass Acari. Both organisms are very small.

The difference is that Soil Mites do not attack the plant itself but only move on the ground and their presence means that the soil is healthy. Thus it promotes the development of the plant.

Spider Mites (see the image), on the other hand, attack the plant, taking its chlorophyll and causing damage. Chlorophyll is a pigment due to which the plants have a green color.

Undersides of leaves are the most common place where you can find colonies of Spider Mites. They can make silk webs there. The plant itself begins to deform and decay and its leaves dry out.

7. Soil Mites Can Also Be Mistaken With Root Aphids

You see some bugs moving around your plant. Are they for the plant harmless Soil Mites or dangerous Root Aphids?

Their differences are shown here

As you can see soil mites are worthy of your attention when it comes to the well-being of your plants and nature in general. When these tiny creatures are in your garden, let them live, because thanks to them, your plants will thrive.